skip to main | skip to sidebar

LADIES AND GENTLEMEN -- Faith Hunter is our Visiting Dignitary this week and has decided to give us a very different take on the usual "interview".  Instead of interviewing Faith, we will have a Chinese Portrait of Jane Yellowrock and Beast.  ENJOY!  And thank you so much Faith! 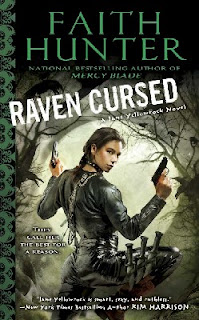 Chinese Portraits have been around for years, but they are a Q&A interview unlike any other. Instead of the usual, “Tell us how you got started writing,” type of query, the questions in a Chinese Portrait dig deeper, into the psyche of a person (or a character) and reveal the hidden depths. Or, God forbid, the lack of them!

Jane Yellowrock is the main character of the series that bears her name. Skinwalker, BloodCross, Mercy Blade, and Raven Cursed are the current books, with out in Oct. 2012. Author Faith Hunter

If you were a work of art?
Jane: A fine, handmade blade, with a crosshatched handle for a good grip. Oh yes!
Beast: (Chuffs in displeasure. Flicks ear tabs, annoyed.) What is art? Beast does not need blade. Beast has claws and killing teeth. I am not some word I do not understand. Not silly game I do not understand.
Jane: Art is like a painting or a … Never mind.

If you were a quality?
Jane: I would want to be strong, like the oak that bends but doesn’t break, or the willow that flows with the wind rather than trying to stand up to it. Lately, my life nothing but fighting and trouble and I need the calm strength of nature. I need a vacation, maybe camping near a river.
Beast: (Chuffs.) Silly Jane. Jane cannot be tree. Jane is animal. But Jane is alone and needs mate. Strong mate. I would look for good mate for Jane.
Jane: That’s not what a quality is, Beast. A quality is—
Beast: Good hunter. I am good hunter. (Turns nose away.) Hunter is good quality. Silly humans.

If you were a flaw?
Jane: for the last few months I’ve been nothing but guilt, even though most of the poop-hits-fan-stuff has not been my fault. Hmmm. I need to stop being guilty.
Beast: Beast is good hunter. Beast has no flaws. (Flicks up ear tab and looks away, bored. Spots movement out the window. Squirrels racing around tree.) Squirrels are small and tasty but hard to catch. One bite and gone. Need deer.
Jane: We’re in the middle of an interview, here.
Beast: (Huffs with disdain.) Want to hunt.

If you were a sound?
Jane: Hmmm. The sound of blades clashing.
Beast: Jane needs mate. Should be sounds of mating. Want Bruiser. And Leo. And Rick. (Chuffs and shows Jane image of very big bed. Covers are slashed by claws.)
Jane: Oh crap. We can talk about this later. Later!

If you were a song/music?
Jane: (Shakes off irritation with Beast.) I like drums. Something primitive and building in tempo and intensity. Something I can dance to.
Beast: Scream of Puma concolor. Scream–song that challenges, that claims hunting ground.

If you were a word?
Jane: I would be persistent. Unrelenting and determined. Of course, when my writer was growing up, she was told that persistence was the Devil’s finest quality, so perhaps that isn’t such a good word after all.
Beast: I am Beast and beast. Do not understand this game. Need to hunt, to bring deer. (Looks around. Squirrels are gone.)  No deer here. Rabbit? Goat? Writer wrote new scene. She let me eat a goat in book 5.
Jane: She did what?!?
Beast: (Huffs with laughter) I like writer. She feeds me.

If you were a book?
Jane: (Looks back at previous question-and-answers. Worries. Shakes head. Sighs.) Dangerous question, that. You know. Since I’m in a series. If I pick one I’m not in, will I disappear?
Beast: Not a book. (Lifts lips to show killing teeth.) Not a book.

If you were a motto/a quotation?
Jane: Have Stakes Will Travel.
Beast: Embrace Your Inner Beast.
Jane: (laughs)

If you were a movie?
Jane: The Vampire Lestsat. Or the Buffy TV shows.
Beast: Born Free. (Huffs with amusement.)
Jane: (Rolls eyes.)

If you were a time period?
Jane: Anytime where women can wear pants. Fighting in a dress is just stupid.
Beast: Time before yunega came and made Cherokee to leave land in mountains, and then took trees, and burned the land. White man is evil. Time before he came was good time. (Turns away.) Stupid question.

If you were a personage of fiction?
Jane: Hmmm. Cat woman?
Beast: (Snorts with amusement) Jane is cat woman.

If you were an animal?
Jane and Beast look at one another.
Jane: Ummm. Have you not read my books?

I love Jane Answer to a motto "have stakes will travel" that a cool answer that could be a tatto and be sweet to show everyone.
vampgrl74@gmail.com

Having had the ultimate pleasure of reading the entire series up to the newest release it never ceases to amaze me how much fun it is to read one of Faith Hunter's character interviews with Jane and Beast!

I especially enjoy poor Jane's time on the "hot seat" because like Beast would love to see her "Mated" to a man who is worthy of her and could take care of her when she let him.

Love the interview...what clever responses. I also enjoyed her clever quote of "Have Stakes, will travel".

Thanks for putting a big smile on my face today.

what an awesome interview!! and i want to go back to that bed part.. lol.. i love this series!! and beast makes me laugh..

Reading this interview was so much fun! I love the interaction between Jane and Beast! I have truly enjoyed this series and look forward to their next adventure!

Raven Cursed kept me up half the night and then I got up first thing to finish it. Great book.
Love the Jane/Beast interviews. Always give me a chuckle. Mmm, Leo, Bruiser and Rick. Sounds good to me. lol

Love the interview. Beast makes me laugh,a lot. She is exactly what Jane needs to keep her grounded. I think they are good for each other.

Fantastic interview!
I LOVE the answers, Beast is a hoot
I love how Jane is constantly put on the spot by Beast.

I loved the last question/answer.

Ive never had the pleasure of reading your work but i very much enjoyed this type of interview. I love kick ass women and will have to check you out.

Thanks for the great interview

That was supposed to read future purchases

Hi Faith!
I like this Chinese Portrait interviewing technique. I loved Beasts response to the "If you were a sound?" question:) This interview and especially Beast really makes me want to read Jane's series now... definitely adding them to my wishlist! Thanks for the visit and interview!!!

Loved the interview, both in method and answers!!!

IF YOU DON'T SEE IT--ORDER IT NOW

ALL MY BOOKS ARE NOW AVAILABLE ON AUDIO

BOOK ONE OF THE THRALL SERIES

C. T. Adams
This is Cie's blog. It doesn't get visited as often as it should. But there you go. My personal website is: www.ctadamsauthor.com